Audit and consulting company AGIC conducted a medical industry benchmark survey that serves to identify trends in the medical industry based on the first, second and third size category companies’ financial statements for 2018.

The data used in the study are taken from the website of the Reporting Portal, where the annual financial statements are published by the legislation of Georgia.

The numbers published in the study are based on 2018 data, processed by financial statements of more than 100 medical institutions belonging to the first, second and third size categories. Only thirty-three companies have audited reports.

The study focuses on the main companies in the medical industry with a total turnover of more than GEL 1,047 million, total assets of GEL 2,247 million, and a total profit of GEL 81 million before taxation.

The study identified industry-leading medical institutions in terms of revenue, assets, and profits.

As a result of the data analysis, it was found that Georgian companies have quite good financial indicators in the medical industry. In particular, return on equity (ROE) averaged 10%, which is a fairly high indicator given that the medical industry is characterized by high capital expenditures. While return on assets (ROA) accounted for 15%, which is also an effective indicator. Besides, the financial ratios of the industry’s average liquidity, efficiency, and solvency were determined.

It is also noteworthy that a large number of companies (26 companies) have ended the year with losses, indicating high competition in the industry.

The study also revealed the average data of 2018 companies by categories, 5 companies belong to the first category, 23 to the second category, and about 80 medical institutions are united in the third category. 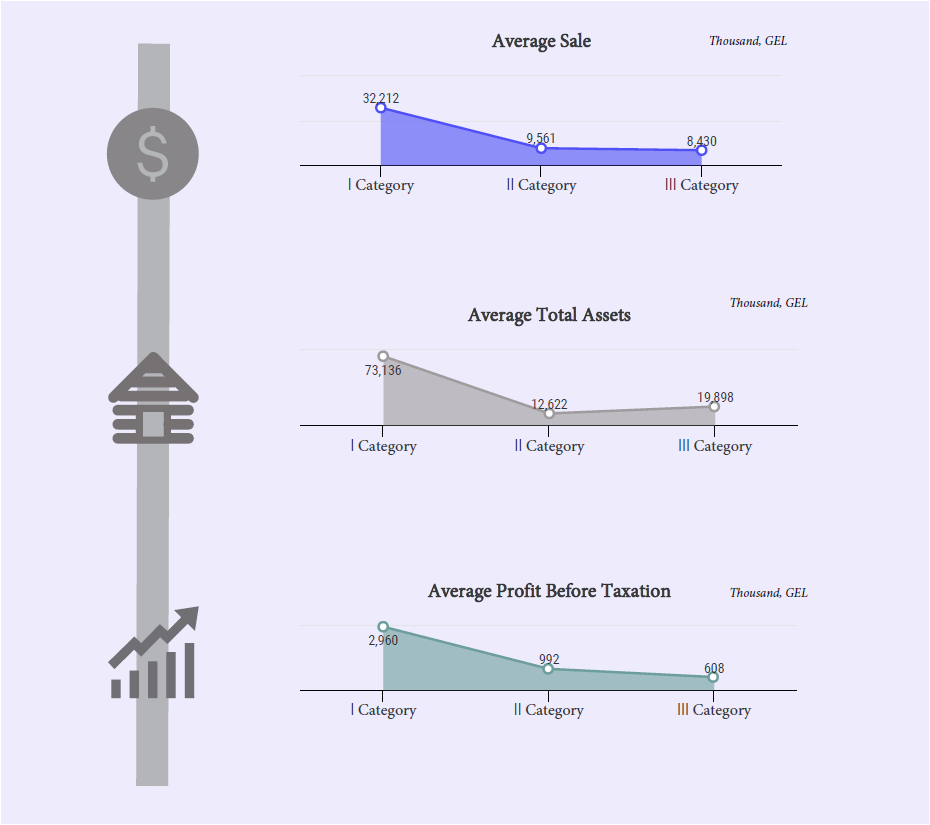 General overview of the medical market

The medical industry in Georgia is developing every year because the country has the potential to function by the standards established in the world, therefore the number of hospitals is increasing, which indicates the growing attractiveness of the sector.

According to the National Statistics Office of Georgia, the number of hospitals and medical centers is growing, reaching 271 thousand in 2018.

As the number of hospitals and medical centers increases, so does the number of doctors and nurses. According to Geostat, there were 27.4 thousand doctors in 2017, while in 2018 their number increased significantly compared to previous years and amounted to 31 thousand.

As for the length of stay in the hospital, 5.2 days in 2017 and 4.9 days in 2018, which is a good indicator and it is possible to assume that medicine is evolving and the elimination of the disease is possible in a shorter period. 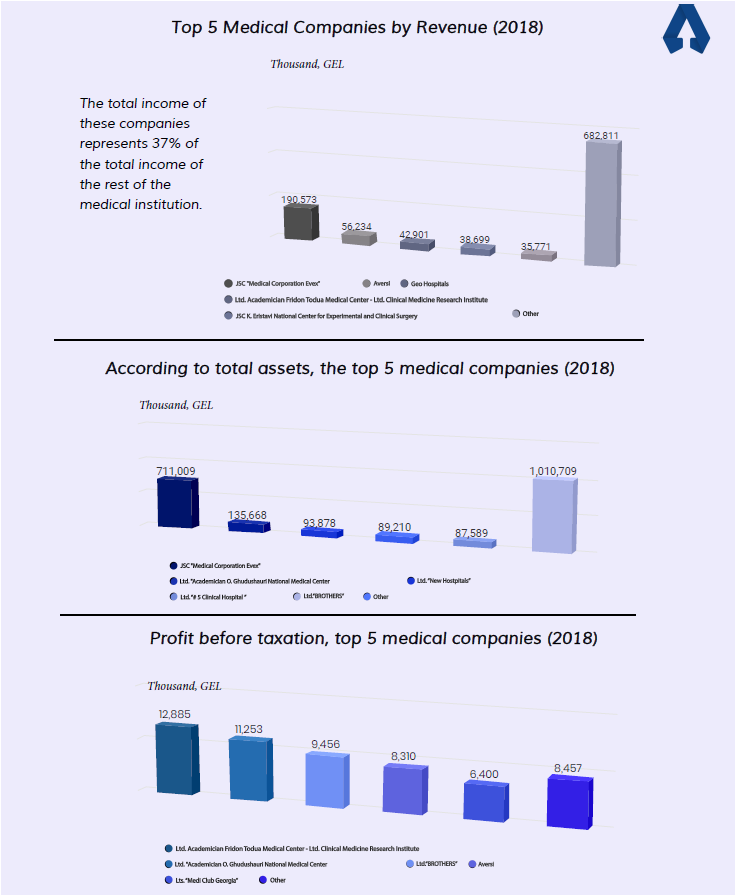 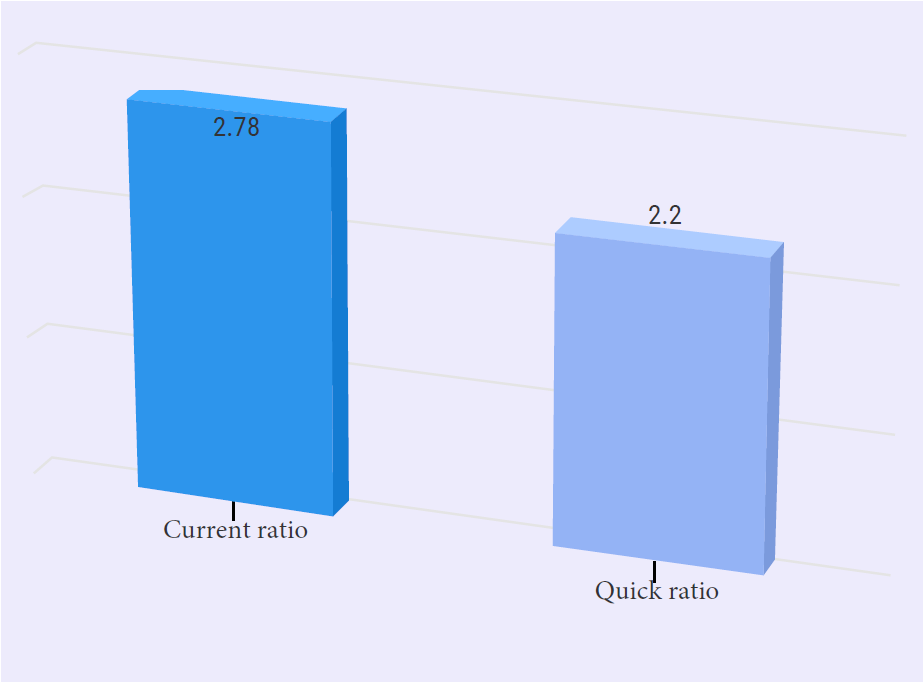 The industry has quite high-profit ratios. The return on equity (ROE) is 10%, and the return on assets (ROA) is high, reaching 22%. It should be noted the high operating profit margin, which is 9.7% and is an indicator of what percentage of sales will be converted into the operating profit of the company.

Debts to assets ratio shows how much the company funds its operations with loans. The average industrial rate is 0.47, indicating a lack of capital about loans.

Also noteworthy is the debt ratio percentage ratio, which stands at 35.12 and suggests that on average companies have no problem paying their loans because the profit before taxation is much higher than the cost of interest payable. 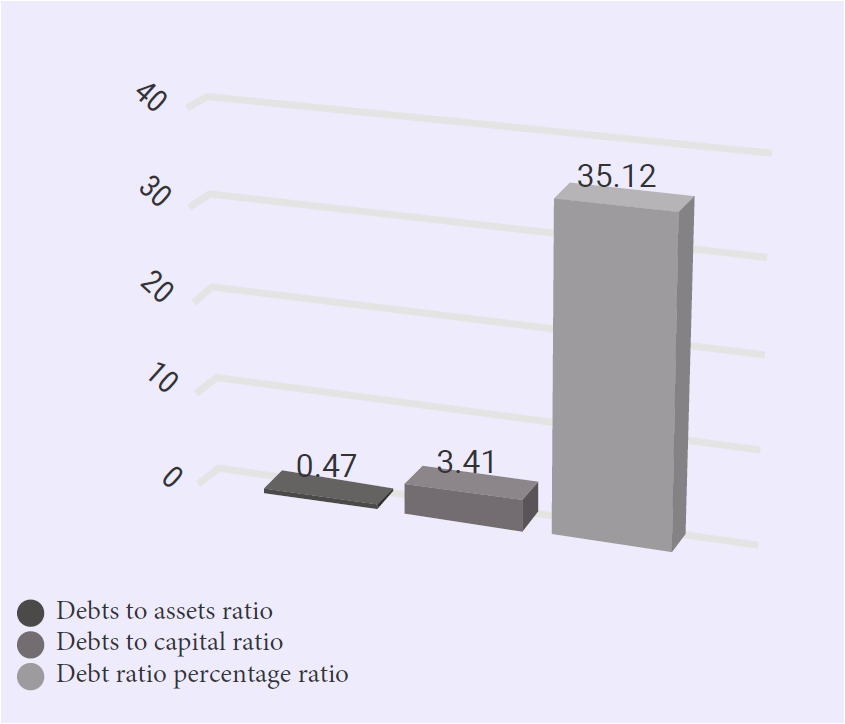 The inventory turnover ratio is equal to 8.65, which is quite a high figure and indicates that companies often have to replenish supplies. In general, the higher this ratio, the higher the number of sales and the less time it takes to stock up.

The asset turnover ratio in the industry is 1.01, the higher this ratio, the more efficiently the company can use its assets about sales volume. The coefficient of 1.01, taking into account the capital-intensive specificity of the medical sector, indicates a fairly high number of sales.